Everything You Wanted to Know About Carnation Flowers 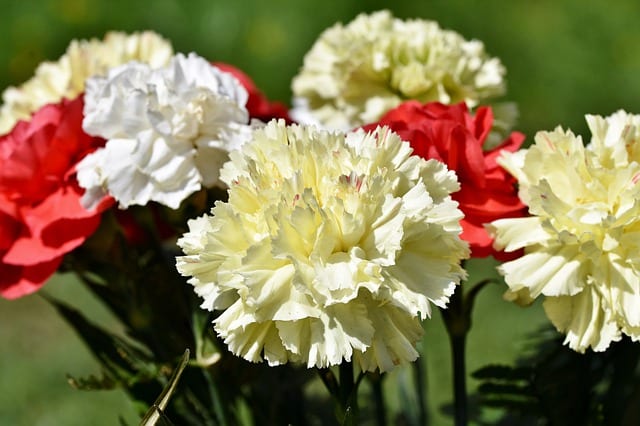 Besides having a very attractive name, Carnations are also very pretty flowers. However, not many people know its real name is Carnation, but it is Dianthus Caryophyllus. The Carnation is closely associated with the Greek God Zeus who ruled Olympus.

For centuries, florists have revered this flower. They are also considered among the oldest flowers on this planet. They date back to Greek and Roman times when they were mostly used for decorative purposes.

Christians relate this flower to Mother Mary weeping while Jesus was carrying his cross. The earliest instances of this wonderful flower were either pale pink or peach colored. Today, they are available in many colors including:

Even though carnations have been around for many centuries, their popularity has remained undiminished. The carnation flowers have an appealing ruffled appearance and excellent scent. More importantly, they bloom for extended periods and this is another factor contributing to their immense popularity. This flower which is closely related to January reflects special meanings including being very distinctive, and they are also very fascinating and closely associated with love.

Without a doubt, carnation flowers are very popular and there are good reasons for this. They are extremely vibrant, and they are available in some colors. Their special appearance and sweet smell and long-lasting bloom all help make this among the most popular flowers on the planet. It is considered among the most desirable flowers. Their high quality and elegance, as well as beauty, are the reasons for their popularity.

This particular flower has been around us for more than two thousand years. So, few other cultivated flowers are as old as this. There is no clarity about its origins, but indications are that it was first grown in Eurasia or in The Mediterranean.

Known by the scientific name of Dianthus, it was given this name by a Greek botanist by the name of Theophrastus. The term Dianthus combines two separate Greek words – Dios and Anthos. The latter refers to this flower as being the Flower of God. Carnation has been derived from the Greek word of Corone (garland or wreath). Its name may also have Latin origins from the term Carnis which refers to the color of the flower i.e. pink. According to Christian faith, the Carnation first bloomed on this planet at the time when Mary wept as her son Jesus carried the cross.

Everyone loves the Carnation and it has often been a very important part of Greek and Roman garlands. Other than that, this flower has also been used for flavoring beer and decorative purposes. By the eighteenth century, this flower has been widely cultivated and was grown in a variety of colors. Some of these colors include crimson, scarlet, and blush. Some varieties even had edges that had stripes on them while others had spots and veins. These were the hybrid variety of which there are four main types, including:

Through special breeding activities, the carnation flower transformed to become a long-lasting flower. They were very popular in Victorian times. The first instance of this flower in the US dates to the year 1852 when it arrived in New York from France. Two years later, it arrived in Australia, where it was grown commercially for the first time.

In these modern times, this flower is widely used to celebrate Mother’s Day. In fact, in the year 1914, Mother’s Day was considered a National Holiday in the USA and has widely been used as gifts on this important day.

These Flowers of Gods are available in many sizes and at the same time, they are also available in hundreds of variations. However, three types stand out, and they are available in numerous varieties. The three major types include the large-sized flowers in which there is a big and main flower on each stem. Then, there is the dwarf-sized flower, which also happens to be the smallest type. Finally, there are the spray flowers in which there are multiple small flowers on each stem.

Of the three main types, there are hundreds of assortments. They include the Red Rocket and the Laced Romeo. Then, there is Gina Porto. The salmon-colored flowers in which the Carnation grows to about a foot in height, and it blooms in May. There is also the Grenadin King of the Blacks. This Carnation is deep purple and red, and it also appears to be like black velvet. The Vienna Mix is another variety worth learning more about. It is different because the flowers are in different colors like red and pink and yellow.

How to Grow Your Carnations?

The first thing you need to know is how best to plant the flower. Ideally, plant the flower in an area that receives not less than four hours of sunlight each day. This flower is partial to sunlight and needs it and so you should keep this in mind. Also, plant the seeds in soil that is properly drained. Also, the soil should be both fertile and mildly alkalized. This flower grows best in temperatures of between fifty and sixty-five degrees during the day. The night temperature should be between forty and fifty degrees.

You can either grow this flower from seeds or cuttings. In the former case, you need to plant the seeds in a properly drained soil mix. In the latter case, you should take the cutting, which should be between four and six inches in size. Insert the cutting into pure sand and leave for between twenty-five and thirty days before transplanting them.

It is also a good idea to learn how to take care of your flowers. The good news is this flower type is very easy to care for. Provided it gets sufficient sunlight and is watered twice or thrice per week, you should not have any trouble with growing the flowers.

This Flower of God is not only very crinkly but is also very cheerful and hardy. It makes for a great ornamental flower. Florists love them for their power to stay the course and gardeners love their smell. They are also very visually appealing.

This flower blooms at different times depending on their location. With hundreds of varieties to choose from, you can pick between an annual or biennial or perennial variety. They are also available in many shapes and shades. In the US, they thrive in zones five to nine.

If you want them for a bouquet, then you need to choose the tall and leggy variety. The more common variety includes the Chabaud and you can buy their seeds in packets. The Sweet William variety is very popular, especially because of its starburst-color. Sweet William flower is electric pink and fades to white color at its edges.

This Flower of God blooms mostly in May. However, this depends on the location as well as the variety is chosen. In some cases, the growing season can continue into the summer. You need to regularly cut the flower as this helps to stimulate new buds and it also helps to prolong the bloom time of the flower.

Now that you know everything about these flowers, go ahead and pic, them for your specific needs. These are among the most beautiful and inexpensive flowers that say a lot. The Flower of God is beautiful, and it serves many purposes. They remain popular because of this and also because they last long. It is a romantic flower that conveys the message you want to convey. It is inexpensive and is fit for Kings and Queens. Even after they have been cut, they will remain fresh for a long time. All in all, they deserve the name Flowers of God.