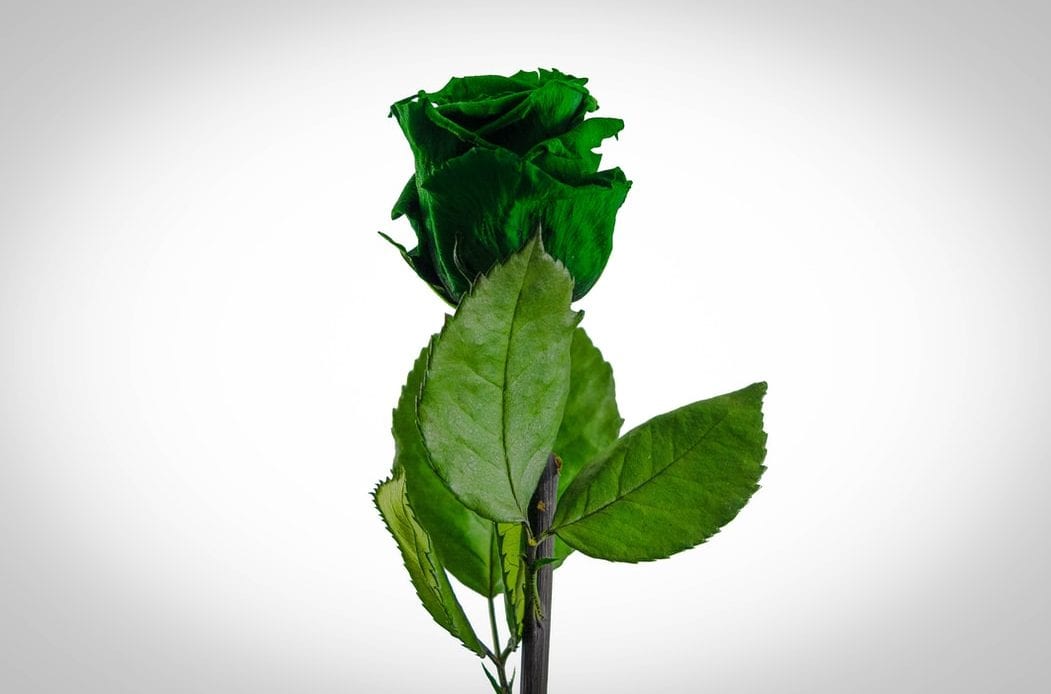 Considered by many as one of the most unique and beautiful flowers, green roses are quite uncommon and rarely seen in nature. Many biologists and flower enthusiasts have compared it to a Canadian Thistle weed in terms of looks. Yet, there are many others who are deeply amazed and delighted by its past. It is a unique rose that needs to be honored and appreciated for its unusual look and smell. This article will explain the aesthetics that define the nature of these green roses and how it appeals to the world.

Let us discuss some interesting facts that set apart green roses from others in its family.

Unlike other varieties of roses, these roses have sepals instead of petals. This small two-inch bloom comprises turquoise green sepals that form a rose flower-like bud before opening. As it opens, the serrated, sharp petals emerge, making the bud look less like a rose. The spear-like blue-green sepals unfurl and start taking a bronze hue as the flower matures.

Green roses come in several shades like mint green roses, lime green roses, or the hugely popular yellowish-green Chartreuse Rose. Though highly uncommon, these roses are undeniably appealing because of their unusual hue as well as the meaning attached to it. Green roses represent congratulations for a person who has experienced good fortune lately. It is perfect for a person who has won a lottery or a home buyer who is making a transition into the abundance of space. It is said to attract luck and bring positivity. The relaxing effect of these roses also makes it the perfect gift for someone who is going through a difficult or stressful time.

The first records of green roses date back to the early 18th century in China. They were cultivated and grown in the famous Forbidden city of China and were the sole property of the Chinese Emperor. It wasn’t till 1856 when the British nursery Bembridge and Harrison brought this flower into England. Known for their big blooms, the popularity of these flowers spread quickly around the world.

· Known as “Rose of the South”

Officially known as ‘Rosa chinensis viridiflora’, this green rose is also called as The China Rose. Even though there is no evidence to support this, many claim that it evolved from ‘Slater’s Crimson China. However, there are many rose experts who believe that it actually emerged from South Carolina or Georgia. It is believed that in 1849, a nurseryman from Philadelphia named Robert Buist grew this green rose in his nursery. He was reported to have acquired the cuttings of this green bloom in Charleston in 1833.

When this green rose made its debut in the Paris Exposition Universelle in 1856, it was very poorly received by the horticulturists. One of them at the exposition even termed it harshly as ‘an error of nature’ or a ‘little monstrosity’. Gardener’s Chronicle in London and the Agricultural Gazette even quipped that “A green-eyed monster like this green rose is not an inviting sight”. However, even though there were many critics of this variety, it continued to flourish and gained its own share of admirers.

· The Green Rose of Furley

The green rose was also mentioned in the semi-autobiography of Helen Corse Barney. She wrote a book about the experience of a Quaker family with the Underground Railway during the mid-1800s. The book goes by the name “The Green Rose of Furley”. The book narrated the story of a nurseryman on Baltimore estate who was famous for producing a novel plant called ‘the Green Rose’. It is said that this plant was original to the Furley Hall until the property ceased to exist in 1953. There is a folklore that states that Underground conductors used to wear a green rose like a wordless signal during all their dangerous missions. However, there is no other mention of this in history to support this legend.

This special rose is unique in the sense that it is an asexual plant. This means that it does not set hips or makes pollen. Therefore, it cannot be hybridized. Still, it has managed to survive for millions of years without the help of man. For this accomplishment alone, this beautiful, unique rose needs to be cherished as a treasure.

Apart from dyed roses, there are several rose varieties that have been developed by rose cultivators that are used widely. They are easily commercially available and add a touch of freshness to any floral arrangement.

Though not accepted at first, they are becoming hugely popular all around the world in the floral arrangements due to the freshness that they bring to the setting. In Ireland, there is a festival called St Patrick’s Day that is celebrated with everything green. People gift their loved ones with green roses along with lucky shamrocks as a symbol of hope and faith. The attractive color of these roses makes for an added attraction to any garden or floral arrangement.