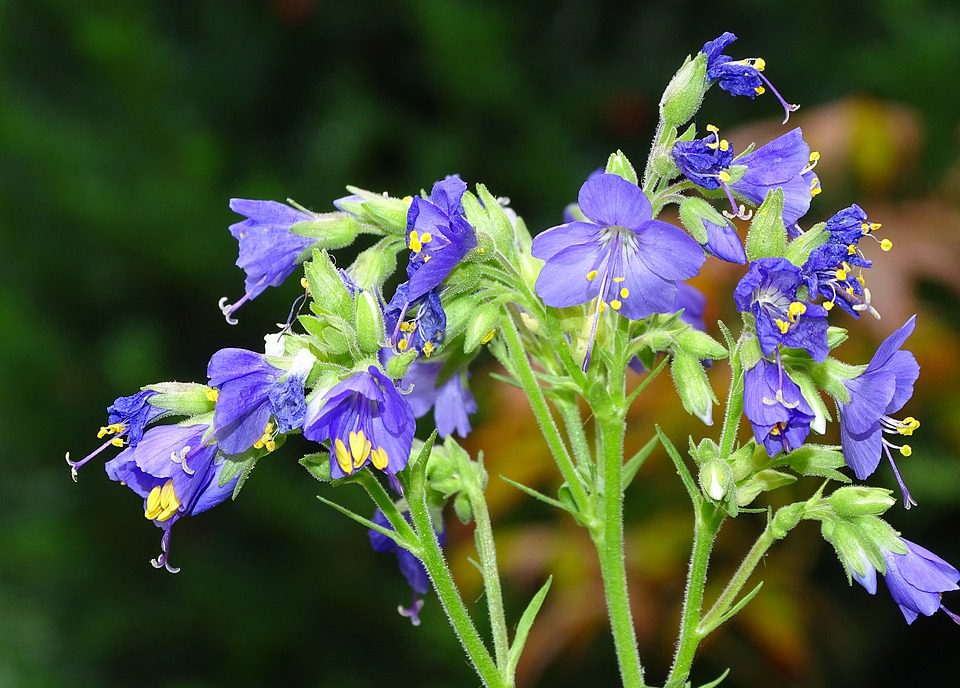 The genus Jacaranda consists of forty-nine species of flowering plants from the family Bignoniaceae. The Jacaranda flowering tree is also known as black poui, and blue jacaranda due to its beautiful blue-purple flowers. Some Jacaranda species also have white flowers.

These trees can grow as tall as fifty feet in high and can spread up to thirty feet or more in width. Cool blue flowers burst into bloom twice a year once in spring and again in the fall. The trumpet-shaped flowers bloom in big bunches. They have a fresh, mild, sweet smell. These trees are found in tropical and subtropical areas and are widely grown across the globe for their stunningly gorgeous flowers and fern-like showy foliage. Jacarandas are one of the most elegant and pretty flowers that start with J.

The woody, arched branches of Jacaranda trees form an umbrella-shaped canopy. Jacaranda trees grow fast in warm tropical environments. They can be grown indoors but will not flower without a sunny environment. Jacaranda flowering plants are a good choice for large gardens, sidewalks, parks, and other open areas where they have plenty of space to spread out. These plants shed a lot of leaves and flowers, so it is wise not to plant them near a pool or a place that’s difficult to clean.

Some varieties of jacaranda mimosifolia are –

Jasmine is a genus of evergreen or deciduous shrubs and vines that belong to the olive family, Oleaceae. There are about two hundred species of Jasmine flowering trees. These plants producing extremely fragrant flowers are native to warm tropical and temperate climates.

Most of the true jasmine species are climbing plants without tendrils at the end of their branches. The flowers can be white, yellow, and sometimes pink. Each flower is lobed, tubular, and has a pinwheel-like structure. Flowers can be single or double. The green leaves may be simple or composed of two or more leaflets. Jasmine is an extremely well-known flower and is extensively used in perfumery and beauty products, flavoring food, and aromatherapy. The fragrance of Jasmine is said to reduce stress and food cravings. It is also thought to elevate the mood. Jasmine tops the list of fragrant flowers that start with J.

Some varieties of Jasmine are –

Also known as rush daffodils, Jonquil flowers bloom on bulbous plants. This flowering plant belongs to the genus Narcissus, family Amaryllidaceae. Some believe, botanically, Jonquils are not true daffodils and are just one division of the thirteen daffodil family.

Jonquil flowers may bloom as a single flower head or may have up to five flowers per stem. There is a cylindrical tubular or cup-shaped projection at the center of each flower. Jonquil flowers bloom in a combination of white and shades of pretty yellow.

The flowers have a mild, musky, sweet fragrance. When compared to daffodils, jonquils have a smaller corona (modified calyx). The petals have a more rounded shape. Jonquils bloom in spring.

In Victorian times, jonquil flowers represented forgiveness, and expressed a desire to return the affection. In other cultures, these flowers symbolize rebirth and renewal, success, creativity and inspiration, vitality, and forgiveness.

Commonly known as sheep’s bit, or Sheep’s scabious, Jasione flowering plants belong to the family, Campanulaceae. This low-growing plant species grows in rocky areas and upland regions. Plants belonging to the Jasione species can be annuals, biennials, or perennials. They are hardy plants that usually grow to a height of 20 to 30 cm.

The flowers may be blue or white and look like a pom pom. Flowers blossom during the summer. Due to their compact, small size, Jasione plants are often grown in the front of borders and even in rock gardens for their hardiness.

This widely available flowering shrub in gardens and landscapes bloom in colors like red, yellow, pink, and white. Scarlet is the most commonly seen flower color. Several dwarf hybrid varieties bloom all around the year. The flowers bloom in dense bunches at the tip of a branch.

These hardy, evergreen plants grow well in light-texture, well-drained, soil that’s fertile with organic matter. The flowers bloom best in full sun but can also tolerate partial shade. The plants grow to a height of four to six feet but can grow taller than that.

Jungle geranium is the national flower of the Republic of Suriname.

Jack-in-the-pulpit is known by several names like bog onion, Indian turnip, and brown dragon. This herbaceous flowering plant from the arum family is a perennial that grows for a corm. Jack-in-the-pulpit flowers look unique as they are a tall stalk covered by a hood-like cup. The actual flowers are tiny, green or yellow-tinged and sit in line like dots on the spadix. The three-lobed hood surrounding the spadix hides the flowers from view. When the flowers are mature, the outer hood falls off and the flowers turn into bright red berries.

Some common Jack-in-the-pulpit varieties are –

Some of the other names for Jojoba plants are wild hazel, goat nut, pignut, quinine nut, deer nut, coffeeberry, and gray box bush. This species belongs to the family Buxaceae. Jojoba plants have leathery, green, leaves and bear small yellow-green flowers. Jojoba is well known for its medicinal values. Oil from the seeds is used in cosmetics and ground seeds are used for making beverages.

The perennial woody shrubs can grow even in arid areas without much care.

In gardens, jojoba plants are grown for their ornamental value. The dense green, attractive foliage often earns them a place as backyard plants.

The Jaborosa belongs to the flowering plant family of nightshades, Solanaceae. There are more than twenty species in the Jaborosa genus. The herbaceous plants have small white flowers and produce fruits that look like berries.

Japanese anemones belong to the family of buttercups, Ranunculaceae. The botanical name comes from Hupeh province, China. Anemones are known to have been grown in Japan for several centuries. Japanese anemones grow in organic, rich soil, and in partial to full sun. They like evenly moist, well-drained soil. The delicate-looking perennials live long without much maintenance. The beautiful flowers make great cut flowers. The flowers have a yellow center with white, purple, or pink petals surrounding them. The flowers are somewhat saucer-shared.

As they are highly flexible to the availability of sunlight, Japanese anemones are often planted in partially shaded gardens and woodlands.

Justicia flowers are known by several names like Brazilian-plume, flamingo flower, and jacobinia. The Justicia genus including seven hundred species of flowering plants belongs to the family Acanthaceae. These perennial plants grow in warm tropical regions. They grow wild in the forests of eastern Brazil.

Japanese aralia plants belong to the flowering ivy family, Araliaceae. These plants are also known as paper plants, false castor oil plants, fatsi, and glossy-leaf paper plants. The plants have exotic, glossy green jumbo leaves. The hardy, upright plants can be grown outdoors or in pots as houseplants. Small, white flowers bloom in fall. These plants are grown more for their unique, showy foliage than their flowers.

Some Japanese aralia varieties are –