Poisonous Flowers that are Harmful to your Pets 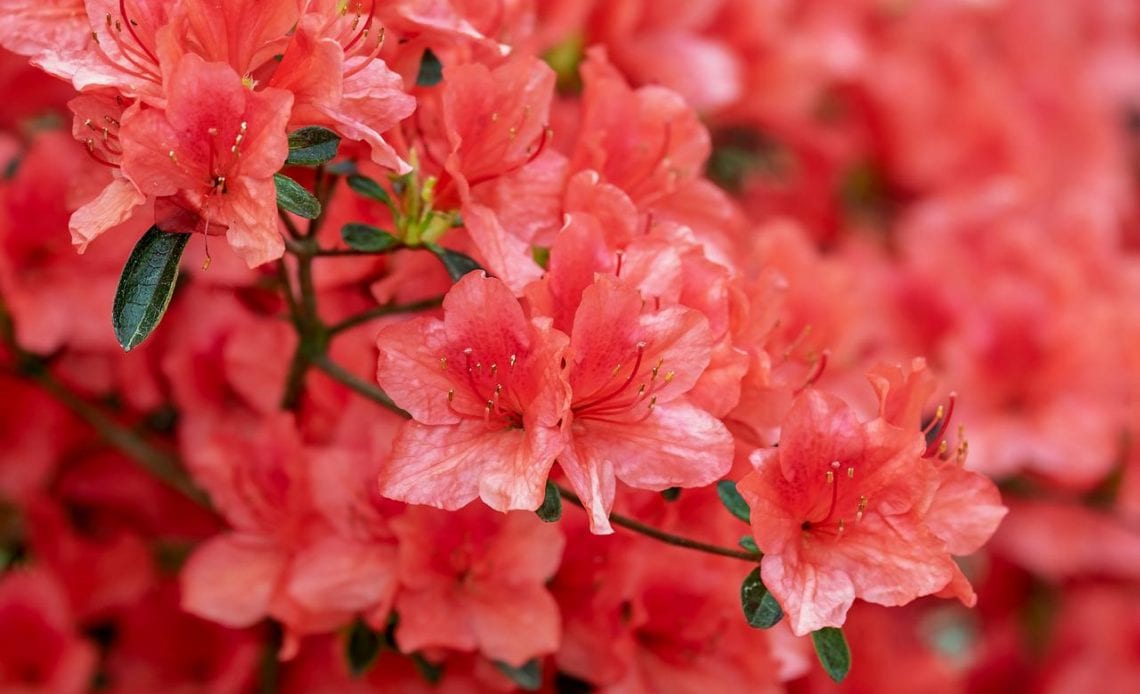 Pets can be allergic to several plants and their flowers. A small proportion of these may even be deadly for your animal. Nearly 10 percent of all sicknesses in household animals happens because of exposure to poisonous flowers and shrubs. Depending on the type of sickness and nature of the poison, symptoms may vary from mild fever and vomiting to unconsciousness or even death.

If you are a pet owner and are looking to grow plants, here are some poisonous flowers and plants you should avoid getting:

Azaleas are a flowering shrub belonging to the rhododendron family. These plants have a bell or funnel shaped structure, and they range from pink to red in color. Their leaves are leathery and oval in form. These plants can grow into bushes and have small trunks.

Azaleas contain grayanotoxin which impacts skeletal muscles, cardiac muscles, and proper nerve functioning. Consuming a few leaves of this plant can cause diarrhea, convulsions, vomiting, and slow breathing. The plant also causes depression in some animals. If medical attention is not provided immediately, an animal could fall into coma or even die.

There are two kinds of Crocus plants. Those that grow in spring are commonly called Crocus species, and ones which grow in autumn are known as Colchicum autumnale. The spring plants are more commonly grown and can cause gastrointestinal problems in animals like diarrhea and vomiting when eaten. Autumn Crocus are more dangerous since they cause severe gastrointestinal issues, kidney damage, liver malfunctioning, and respiratory issues. If you detect these signs in your pet, a veterinarian can help with delaying them for several days.

Several types of Dragon Trees are in existence, with one variety growing up to a height of nearly 30 feet. The leaves are green in color and it produces flowers that are not visible. It is less poisonous in nature than other plants. When consumed, it can cause diarrhea in cats.

Marijuana or cannabis produces the psychoactive drug used for medicinal and recreational purposes. They are poisonous for household animals since they can trigger diarrhea, vomiting, drooling, and depression of the central nervous system. They can also cause heart arrhythmia, seizures, and coma.

Chrysanthemums have an umbrella shaped head and appear from July to September. Their leaves are nearly 25 cm long and the stems can be as high as 130 cm. When the flowers are crushed, an aromatic smell is released.

These are perennial plants which are prized for their flowers containing upswept petals and distinctly patterned leaves. They are popularly known as primrose and may appear in pink, red, or white colors. Their stems are 20 cm long and usually bloom around August to April.

Cyclamen are attractive but also one of the most poisonous flowers. If ingested, they can lead to severe nausea accompanied by diarrhea, vomiting, and sweating. Lethal doses of the flower can cause blood circulation problems and respiratory paralysis. Externally, it can inflame the skin and damage the eyes.

Kalanchoes, or widow’s-thrill, are thick leaved succulent plants that are native to Madagascar. Their scalloped leaves are as valued as their star shaped flowers. The flowers are long lasting and normally bloom in winter to spring.

These plants are toxic to cats and dogs since they can affect normal heart rhythm in animals. They can also cause vomiting and diarrhea.

Daffodils are flowering plants that bloom in spring. The flowers may be white or yellow in color and have six petals. They are usually cultivated both indoors and outdoors by plant growers.

Daffodils contain lycorine which triggers the urge to vomit. Consuming the plant, its flower or bulb can lead to diarrhea, abdominal pain, cardiac arrhythmia, and respiratory problems. Crystals found on the outside of daffodil bulbs can irritate tissues and cause secondary drooling.

Dumb Cane has a shape that varies from oblong to oval in structure. It consists of a greenish husk and has dark green leaves with white spots on them. These plants can be as high as six feet.

Dumb Cane is extremely toxic for household animals. It can cause irritation in the mouth, neck, stomach, and intestines. Pets can also have trouble breathing or swallowing. Other symptoms include bloody diarrhea, loss of voice, and potentially death.

Lilies are herbaceous flowering plants which produce prominent flowers. Both toxic and benign variations of lilies exist, and it is useful to note the difference between these types.

Varieties like Calla, Peace, and Peruvian carry oxalate crystals in them which can cause tissue irritation in the esophagus, mouth, pharynx, and tongue. Secondary drooling may also happen if these are ingested. On the other hand, varieties like the Asiatic, Day, Easter, Japanese Show, and Tiger lilies are more dangerous, especially for cats. Consuming even a small portion (2-3 leaves or petals) of these can lead to malfunctioning of the kidneys and therefore should not be placed in an area accessible by your cats.

Lily of the valley is a sweet scented, bell-shaped white flower that blooms in spring. It is found in the cool weathers of the Northern Hemisphere in Asia and Europe. Lily of the valley consists of cardiac glycosides which can trigger symptoms such as vomiting, diarrhea, severe heart arrythmia, and potential seizures.

Both tulips and hyacinths consist of allergy causing lactones. Toxicity is mainly concentrated in the bulbs of these plants and when ingested, can irritate tissues found in the esophagus and mouth. If small quantities of the bulb are eaten, it can cause excessive drooling, diarrhea, and vomiting. However, consumption of larger quantities leads to more severe symptoms like cardiac arrythmia and respiratory issues.

Amaryllis, popularly knows as Pink Floyd, is a bulbous plant with trumpet shaped flowers. Amaryllis can be red, pink, or white in color and consists of a stem that can be as tall as 90 cm.

Symptoms arising from consumption of these poisonous flowers include excess perspiration, diarrhea, and salivation. Other symptoms are nausea, vomiting, and unconsciousness. In extreme cases, kidney failure and paralysis may also occur.

Oleander grows as a shrub and as a tree. Its flowers are pink or white in color and have five petals. The leaves are leather-like and the plant can grow up to six meters in height. The flowers usually appear between July to September.

All parts of the oleander plant are considered toxic and fatal even for humans. Noticeable symptoms following consumption include cooling of the limbs, reduced body temperature, and dilated pupils. Diarrhea and gastrointestinal problems may also occur. Death due to cardiac paralysis is likely.

The leaves of the Snake Plant have a sword-like structure and pale green marks. The flowers of these plants are yellow in color and strongly scented. These plants grow up to a height of about three feet. This plant is toxic to all household animals since it causes vomiting, nausea, diarrhea, and cramps upon consumption.

Weeping Fig, also known as rubber tree, is a slender plant with dense, dark leaves. Its leaves secrete a milky white substance called latex. Latex can cause gastrointestinal problems when eaten or skin irritation when it seeps into the skin through minor cuts. Mild stomachache and diarrhea may also take place. Other symptoms include depression, vomiting, and improper movement.

These are a group of seed plants that are related to conifers. Found mainly in regions with warmer climate, they are grown as ornamental plants. They are extremely harmful to animals. If eaten, an animal can suffer from blood stool, vomiting, jaundice, and increase in thirst. More serious symptoms include gastroenteritis, bleeding disorder, liver failure, and possibly death.

Castor Bean is a perennial large shrub or short tree that is fast growing in nature. It can grow up to 40 feet in height. In frost free climates, castor beans can develop woody stems over a few years.

Castor bean contains ricin which is a highly toxic protein that generates loss of appetite, vomiting, and severe abdominal pain. Drooling, increased thirst, and fatigue are some mild symptoms. In severe cases, an animal can suffer from dehydration, tremors, coma, or death.

Schefflera genus has about 600 to 900 species of plants that grow up to about 20 meters tall. Schefflera contains calcium oxalate crystals which give rise to oral irritation, vomiting, and excessive drooling when consumed. Other symptoms include trouble with swallowing food and pain in the mouth and tongue.

This plant is popularly used as an ornamental ground cover or for covering on walls. English Ivy is regarded as a mildly toxic plant, but the risks are greater if your pet consumes larger amounts of it. Common noticeable symptoms include abdominal pain, excess salivation, diarrhea, and vomiting.