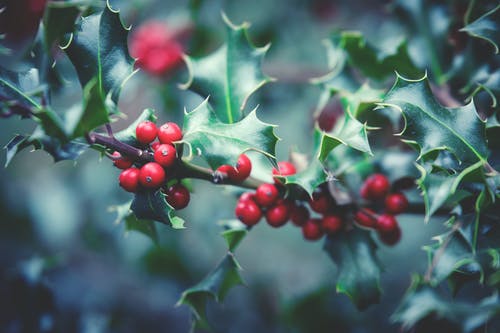 Holly, scientific name Ilex Aquifolium, is the only living member of the Aquifoliaceae family with more than 400 varieties. They can be found all over the world. They are not technically flowers, but evergreen trees, shrubs and climbers that grow to be 10 to 15 feet (4.57 meters) tall, bearing red berry-like fruits. They have simple green leaves with spiny edges and the fruits ripen in the winter. These berries cannot be consumed by humans because they contain a compound called theobromine, but are a common source of food for birds, especially Robins.

Despite not being a flower, holly has several legends and meanings associated with it and is an important part of the history of Northern Europe. When all other plants are dying and wilting in the winter, the holly remains vibrant with its green leaves and deep red berries. For this reason, it is considered a miracle plant and is also the birth flower of December born people.

There are a number of legends associated with holly, rendering it an extremely significant plant in European Culture. Its importance has resulted in it acquiring many meanings, all of which are positive and hopeful. The flower holly means happiness, optimism and peace. It represents good fortune and enduring.

Most cultures considered holly to be magical. The holly has many meanings across cultures, old and new. In many ancient European pagan cultures, the holly flower meant the waning sun, indicating the commencement of winter beginning from the summer solstice. It was also believed that holly would trap evil in the spines of its leaves and hence people brought it into their homes for decoration. People also believed that holly would ward off witches.

In some Wicca cultures, one of the many faces of the Sun God was the Holly King, who is born at midsummer.

Holly meant a great deal to Romans, especially during the Saturnalia festival. Saturnalia was celebrated during the winter solstice, to honor the Roman god Saturn. They would decorate their homes with it and gift holly wreaths to each other during the celebrations. This was because it was one of the few plants that were still lively during that time of the year.

Romans also believed that if wood from holly was thrown at an animal, the animal would return and lie down. They also thought that holly could make water freeze. According to them, holly planted near a house or a farm would ward off witches and protect the structure from lightning. The legend about lightning, surprisingly, holds true. Holly leaves act as lighting conductors and can protect the trees and other plants around them by absorbing the shock and sending it to the earth.

It was very important in the Celtic legends. It was considered the twin of oak. The oak was thought to rule over the daytime and holly over the dark nights with its vibrancy. It was also believed that it controlled winters. Celtic chieftains wore holly wreaths to attract good luck and fine fortune. They also bathed newborns in water from the boughs to ward off evils and protect the babies.

The Druids considered the holly sacred and believed that it represented fertility and endurance. This was because it bore fruits in the winter when the rest of the land was barren. The Druids believed that holly remained green throughout the winter to beautify the earth and make sure it remained vibrant even when all other plants shed their leaves.

The most recent legend associated with holly is that written in Christianity. Christians view the holly flower to mean festive joy during Christmas. They believe that Jesus Christ wore a holly wreath upon his head. The deep red berries represented the blood Christ spilled to emancipate the people and the spines on the leaves represent thorns. It represents Christ’s suffering. Legend also says that holly plants grew wherever Christ stepped foot, but another one says that the cross he was crucified on was made of holly.

In England, Christmas trees were initially holly trees, not pine trees. The English also use a sprig of holly to decorate their plum pudding, a famous Christmas delicacy.

The white blossoms of holly are said to represent purity. It is also said that if the holly decorating a home is prickly, the house will be ruled by a male influence that year. If the holly is smooth, the influence will be female.

Holly is even included in the Christmas Carol, “The Holly and The Ivy”, where the holly is representative of Jesus and the Ivy represents Mother Mary.

Holly is most commonly used for ornamental purposes, especially during Christmas time. They are hung around the house and used to decorate the interior vibrantly.

In South America, people make a tea out of holly called Mate. It was also used as a cleanser in rituals. They would make a tea from it, called Yaupon, that would induce vomiting.

American Indians have used it as a heart stimulant. Holly bark was often used to make cough syrup. Its bark is useful in treating fevers, joint pain, muscle pain, digestive issues, water retention, heart conditions, swelling and a variety of other conditions.

The holly flower has a plethora of legends and meanings, mostly in the European region. Its vibrancy even during winter makes it a magical, miracle flower. In fact, it is considered so important until today that it is even a part of pop culture. In the Harry Potter series, there were appearances of wands made of bark from the holly tree. It also has many medicinal benefits and is salient in treating a variety of conditions. The denotations of holly are deeply rooted in ancient cultural practices and traditions. It can hence be considered a channel that connects us to our past, tying us to our origins, reminding us where we come from.