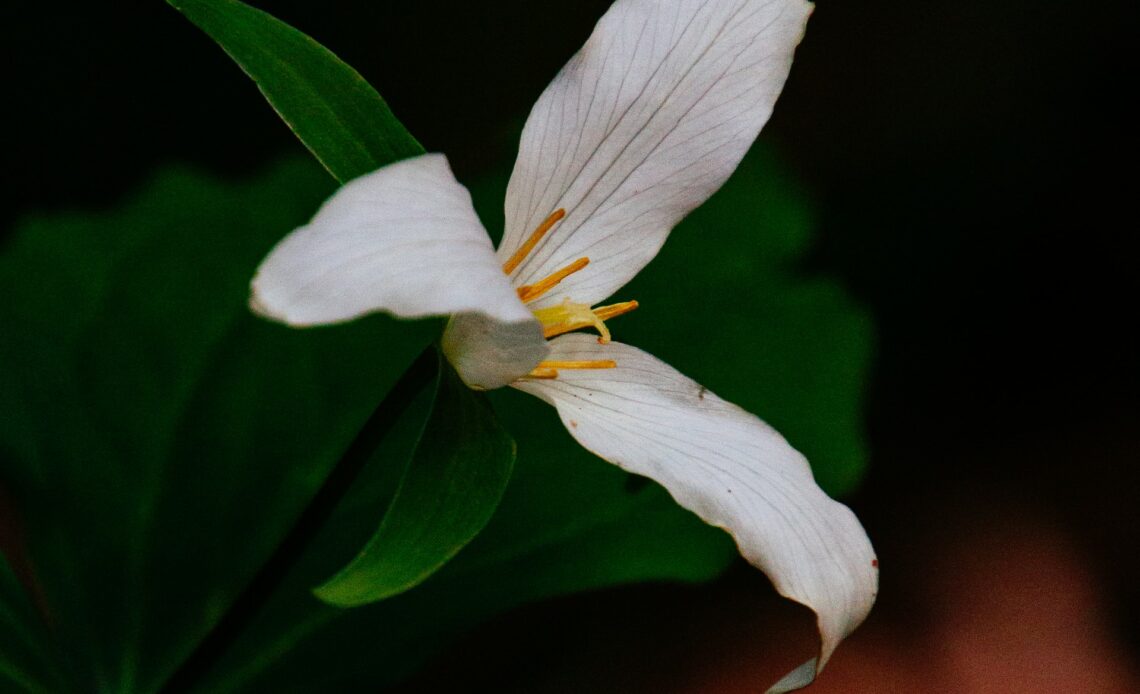 A member of the lily family, the scientific name of this three-petaled flower is Trillium grandiflorum. It is formed from the following Latin words. ‘tri’ means three and refers to the three parts of the flower. ‘Lilium’ denotes the large family (Liliaceae) of herbaceous plants. Grand means large and flora refers to the goddess of flowers. Hence the scientific name literally means a three-parted large flower belonging to the lily family. This is a perennial, long-lived, herbaceous plant species that is predominantly found in the woodlands of the eastern part of North America.

The trillium flower meaning and symbolism is one that is culturally significant across North America. It had been ordained the official flower and symbol of Ontario province in Canada. Trillium flower is also the official wildflower of the US state of Ohio. There is even a soccer cup named after the flower known as the ‘Trillium Cup’. It is competed by Major League Soccer teams ‘Toronto Football Club’ and ‘Columbus Crew’. The flower is also symbolized in the bisexual pride flag of the Mexican LGBT community.

Various Colors and Types of Trillium

One of the most common types, this subspecies of flowers is white in color. But they tend to become pastel pink upon aging. In common parlance, they are known by the names white trillium, American wood lily, and American wake-robin. They belong to the Melanthiaceae family and are hardy in the USDA classification of zone 5..

This subspecies is also known by the common names blue ridge wake-robin, twisted trillium, and propeller trillium. It is a perennial herb that is found in areas from central Tennessee to the Mississippi coast. A member of the Liliaceae family, this variety has an unbranched stem. The colors of this type range from pink, maroon, and purple to white and yellow. The type has poisonous characteristics of low severity, and hence should be kept away from children and pets. The leaves are predominantly elliptical but can also be ovate in some cases.

A native subspecies belonging to North Carolina, this flower has large yellow petals. Hence, it is also known as yellow trillium and also by other names such as wood lily and yellow toadshade. A unique characteristic of this subtype is the pleasant lemon aroma that it can emanate. It is hardy in USDA zones ranging from 4 to 8.

Flowers belonging to this subtype are either dark red or maroon in color, and the petals are boat-shaped. But in some variations, they can be seen in pink as well as yellow colors. The ideal soil quality for this type is acidic, and they are hardy in USDA zones 5-7.

Commonly known as nodding wake-robin, bent trillium, and drooping trillium, this subtype is found in the regions from Minnesota to Ohio, and south of Tennessee. An endangered species in Ontario, Canada, this variety has been extirpated in North Carolina. The colors of the flowers are mostly white, but they can also occur in reddish and maroon colors. They are hardy in USDA zones 4 to 7.

Commonly known as the wood lily, this subspecies is native to the Southeastern United States and is hardy in zones 5-8. The flowers of this type are fragrant and showy and occur in a maroonish-yellow hue.

About a total of 49 trillium species varieties are found throughout the world with 39 varieties found in North America alone. Relatively easy to grow and extremely long-lived, they are also traditionally referred to as wakerobin, birthroot, and toadshade. They are called birthroot as they have medicinal applications during childbirth. Trilliums are a very mild species and are not so competitive. Hence, it’s advisable to refrain from growing them along with aggressive plant species.

Trilliums are classified into two major groups known as pedicellate and sessile trilliums. Pedicellate trillium flowers sit upon a pedicel or stalk that itself emanates from a whorl of bracts (leafy structures). The flowers may either stand erect over the bracts or curved under them. In sessile trilliums, the flowers originate directly above the bracts and there is no stalk or pedicel to separate them.

Trillium flower meaning and symbolism also include great medicinal utilities. Many trillium species flowers are rich in chemicals known as sapogenins. These compounds have been used over the centuries as expectorants, uterine stimulants, coagulants, and astringents. Thus some trillium flowers are also known by traditional names such as Indian balm and birthwort. As astringents, these flowers have been found effective in treating diarrhea and in controlling bleeding.

Since plucking even parts from a trillium plant can end its life, it has been declared illegal to pick them in Minnesota and Michigan. In Ontario, Canada, the rare subspecies of trillium flexipes (drooping trillium) is protected by law. In New York State, the subspecies red trillium is protected under state laws. In some regions around the world, trillium species flowers are harvested in an overzealous manner, and this has resulted in severe habitat losses in those regions. Because of their high medicinal value and exaggerated prices, entire stretches of Himalayan forests have been destroyed by harvesters. As these forests are highly sensitive ecologically, this has led to several mudslides in those areas.

Since it is illegal to pick trillium flowers in many locations, finding one of those in flower shops can prove to be impossible. But you can however gift a framed painting or a picturesque photograph of this delightful flower to your loved ones. This, you can do to convey your message of spreading elegance and grace.