With bright, vibrant colors, the Balsam flower is an annual flowering plant. It also goes by the names garden balsam, rose balsam, spotted snapweed, and at times, touch-me-not (owing to the explosive discharge of seeds from the ripened pods). The botanical name of this plant if Impatiens balsamina, and it is a native of India and Myanmar.

Belonging to the Balsaminaceae family, this plant is widely distributed outside its native place, and ranges from Europe to Asia, North America, and Africa as an ornamental. The plant has thick, upright succulent stems that grow up to 75 cm (30 inches) tall. Typically, the light green leaves have pronounced veins and serrated edges, and are alternately arranged on the stem. Often, the upper leaves grow in a whorl (with three or more leaves growing in a circle from the stem).

The flowers have double petals and grow in a range of colors: purple, orange, pink, and red. They remain partially hidden in between the large leaves and have five petals with fused lateral pairs. These colorful flowers could grow as cup-shaped single blossoms or double blossoms. The Balsam flowers resemble mini roses or camellias and are irregularly shaped, arising from the axils of the leaves. They bloom late in the spring and are persistent till frost in the fall.

The flowers have both male and female organs, with pollination done by insects. Even at the slightest touch, the capsules burst open, and spread the seeds inadvertently, at a distance from the plant. Owing to this, the collection of the seeds is quite difficult.

These plants prefer the common sun to partial shade preferences, with a moist setting, and have a low drought tolerance.

There are many balsam varieties including:

· Bush Mix: This variety of balsam plants stays compact and full, without getting lean towards the end of the growing season.

What Do Balsam Flowers Symbolize?

The balsam flowers meaning symbolizes ardent love. In the language of flowers, it implies impatience or impatient for love. This gives the balsam flower meaning of impatience, quite literally, from its botanical name.

Balsam flower meaning is also healing, with different parts of the plant being used traditionally as a remedy for diseases and skin afflictions. The leaves are used to make a juice for treating warts and snakebites, while the flowers are applied to burns. Technically, balsam flower meaning is an aromatic oil that is used for healing purposes.

What do the Various Colors of the Balsam Flower Mean? 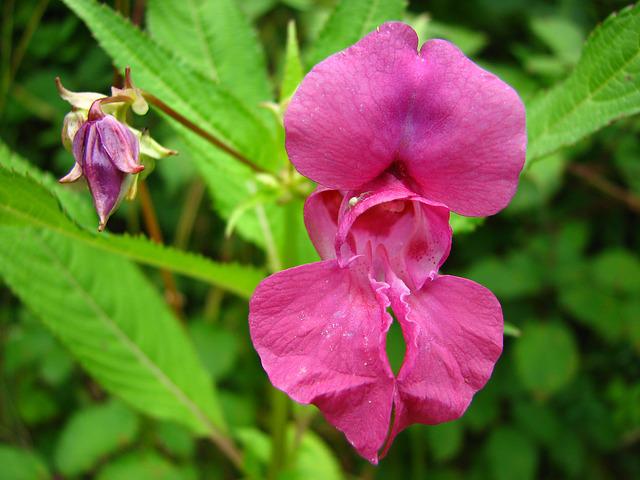 One of the more common colors of the balsam flower, the pink balsam flower is one of the reasons that this flower is also called rose balsam. This color is associated with kindness, love, friendship, affection, and inner peace.

The red balsam flower is symbolic of courage, anger, love, and life. One of the reasons the balsam is also called rose balsam is because of its red variety that represents red roses.

One of the hues of the Sun, the orange balsam flower is symbolic of joy, warmth, and sunshine. It also represents encouragement, creativity, and happiness.

The purple or lavender color balsam flowers are representative of wisdom, bravery, and spirituality. The purple color is also symbolic of enlightenment and encouragement.

This balsam flower variety is an aquaculture plant with irregular flowers that have five purple, pink, or white petals resembling an English policeman’s helmet. The Himalayan balsam is listed as prohibited species as per the Weed Control Act and is also prohibited under the Fisheries (Alberta) Act. Selling, importing, transporting, or possessing this prohibited species is illegal.

Interesting Facts and Characteristics of the Balsam Flower

· The botanical name of the balsam flower meaning is ‘impatient’ and implies the readiness for the dispersal of the seeds of the plant.

· When the seedpod ripens, it bursts with slight pressure and scatters the seeds.

· The self-seeding tendencies imply the balsam flower meaning of possibilities of weedy spreading.

· In Victorian times, the Garden Balsam was the flower of choice that superseded them. The garden balsams would be planted widely in cottage gardens during the warm weather and made for semi-formal as well as casual displays.

· The classic Victorian variety called the Pink Perfection or Pink Lady’s Slipper is occasionally available today and has soft pink blooms that carry a pleasant perfume.

· These plants have a low severity poisonous effect of the leaves on humans. Consuming large quantities of raw accumulates calcium oxalate. This compound is used by the plant as a defense mechanism against grazing.

· In Korea, crushed balsam flowers are mixed with alum for producing an orange dye that is used for dyeing fingernails. This is a semi-permanent dye, with traces of color getting removed with the dyed nails growing off over time.

· The Himalayan Balsam flower is an Indian native semi-aquatic variety. This plant infests native vegetation and displaces it, thus causing a reduction in habitat for wildlife and native plants.

· The Chinese use the balsam plant to treat people who have snakebites or those who have ingested poisonous fish.

· The Vietnamese use the extract of this plant to wash their hair, for stimulating hair growth.

· In Korea, this species was used in folk medicine for treating people suffering from constipation and gastritis.

· The Impatiens balsamina plant is entirely edible, with leaves and stems. When cooked, it tastes more like asparagus. The calcium oxalate in this plant, which is also found in rhubarb, gets destroyed when cooked. However, it isn’t suggested for consumption by people suffering from rheumatism, arthritis, renal stones, gout, etc.

A bouquet of the different colors of balsam flowers makes an ideal gift for anniversaries or birthdays of loved ones. Alternatively, a bouquet of balsam flowers mixed in with other more expressive flowers could be gifted on special occasions. However, this isn’t a commonly gifted flower. Rather, a balsam flowering plant would make a great gift for a gardening lover. A garden front of colorful balsams makes a lovely sight.