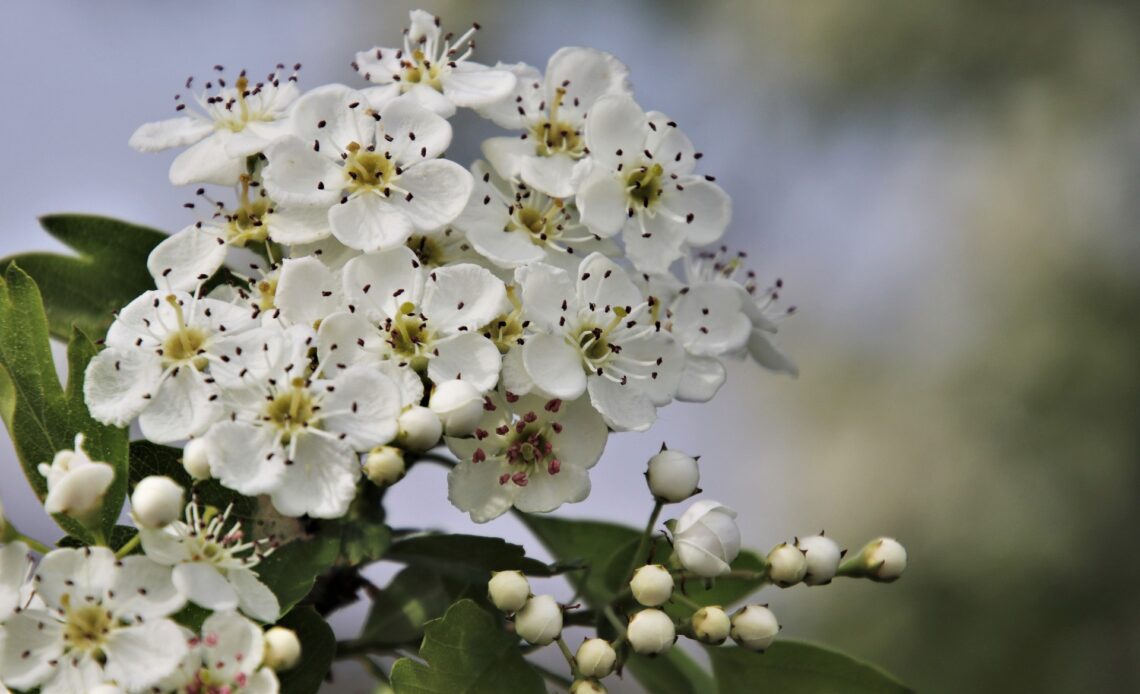 The hawthorn flower belongs to the family Rosacea and the genus Crataegus. Hawthorn species are shrubs or small trees, typically 5–15 meters tall. Etymologically, the name of the genus comes from two Greek words — kratos, meaning ‘strength’ and akis, meaning ‘sharp’. These are references to the strength of the wood and the presence of thorns in some of the species. The word hawthorn comes from the Old English word hagathorn meaning ‘hedge thorn’. The hawthorn flower is also known under many common names, including May-tree, gaxels, hagthorn, thornapple tree, quickthorn and hawberry. While being native to the north temperate zone, hawthorn flowers are widely distributed as cultivar ornamental plants. The hawthorn flowers are white or pink, typically in clusters. The fruits are small pomes, and can be red, orange, blue or black.

Hawthorn Flower as a Symbol of Protection From Fire and Storms

According to an Aryan myth, the hawthorn flower sprang from a lightening which revealed its sacred status. Hawthorn was one of the sacred trees of Taramis, the northern Jupiter. Pyrenean peasants thus believed that wearing hawthorn branch or a flower gave them protection against thunderbolts, lightening and fire. The ancient Germans used Hawthorn wood for their funeral pyres, after consecrating it with a mallet, the symbol of Thor. According to their belief, the sacred fire of the burning hawthorn wood carries the souls of the dead to heaven. In the French city of Biarritz, an old custom involved making hawthorn wreaths on St. John’s day. After a prayer, the wreaths were thrown into the sea, and people believed that this act protected them from evil spirits throughout the year.

Hawthorn Flower as a Symbol of the Savior

Due to this connection to the Savior, it was believed that no evil spirit could enter a house in which a hawthorn flower was placed. Roman Catholic legends tell that when the Holy Crown blossomed again, the air was filled with the scent of the hawthorn bloom. In medieval times, rosaries made of hawthorn wood were in high demand and very valuable.

Hawthorn Flower as an Emblem of Weddings and Fertility

Another hawthorn flower meaning is associated with weddings and fertility. In Roman mythology, there is a story called the Abduction of the Sabine Women, in which Roman bandit men mass-abducted young women from the surrounding regions. The order was given by Romulus, the founder of Rome. His goal was to maintain the strength of Rome by increasing the city’s population. The story goes that the shepherds carried hawthorn boughs on that occasion. Since their mission turned out a success, the hawthorn acquired the status of a propitious flower. Following this episode, branches of blooming hawthorn flowers became an emblem of men assisting during wedding celebrations. When the newly-wed couple were escorted to the bridal chamber, their path was lighted with torches made of hawthorn wood.

The ancient Greeks considered it a symbol of conjugal union and its tree was considered a good omen. Certain Greek wedding customs including hawthorn flowers have survived even today. One such custom is adorning the bride with garlands wreaths made of blossoming hawthorn twigs. The nuptial altar is sometimes decorated with hawthorn blossoms. In an old Turkish custom, sending a hawthorn branch was a way to say that a lover wishes to receive a kiss.

Hawthorn Flower as a Symbol of Danger and Witchery

Hawthorn flowers do not always have auspicious symbolism. For example, an Irish superstition goes that those who sleep in a room with a blooming hawthorn attract bad luck or even a great misfortune. According to other Irish beliefs, it is unlucky to ever bring inside the house a blossoming hawthorn. Irish countrymen also believed that the most dangerous were the old and solitary hawthorn bushes growing in the moorlands. Those belonged to the fairies, and if someone plucked even a leaf from those bushes, they would invite trouble. A local legend goes that those who dare to cut down a hawthorn tree invite the wrath of the fairies.

Being a “plant of the witches,” the motif of a hawthorn flower is found in folklore and fairytales. According to one such belief, when witches marry, they make a magical potion using hawthorn and wild rose and give it to their husbands at night. This potion is so potent, that it keeps the husband deeply asleep all night long. The witch can then go out at night, and engage in her witchery.

Hawthorn Flower as a Symbol of Youthfulness and Longevity

Since the hawthorn tree has a long lifespan, and its wood is renowned for its durability, the plant became a symbol of longevity. The famed venerable Hawthorn Tree of the Cawdor Castle, near Inverness, is said to have stood there since time immemorial. The legend goes that the proprietor of the castle dreamed a dream in which he was instructed to erect the castle over that tree.

Hawthorn Flower as a Royal Symbol

A curious historical incident involving the hawthorn flower made this flower an emblem of the royal house of Tudor. On August 22, 1485, Richard III was killed in the battle at Bosworth. The enemy soldiers plundered his body of its armor and ornaments, but a soldier hid his crown in a hawthorn bush. The crown was later recovered and placed on the head of Henry VII, the first monarch of the house of Tudor.

What Do the Various Colors of the Hawthorn Flower Mean

Interesting Facts and Characteristics of the Hawthorn Flower

The Best Time to Gift Someone Hawthorn Flower

Since the hawthorn tree has the reputation of being strong and living long, hawthorn flowers can also be gifted to the elderly (especially grandparents), with wishes for good health and longevity.