Dahlia is the name of a particular genus of flowers. If you are searching for the etymological dahlia flower meaning, it can be a tough job. How Dahlia got its name is still a mystery. Some people believe that the Swedish zoologist and botanist had named this flower after a student. But this might not be the fact because he died before he could name the flower. ‘Dal’ is a Swedish word, which means ‘valley’. ‘Dalia’ is a homophone of this word. These flowers are also referred to as ‘valley flowers’. Interestingly, some scientists like the botanist Carl Linnaeus tried to unsuccessfully rename this flower ‘Georgina’. He tried to do it in 1805 and wanted the flower to be named after Johann Gottlieb Georgi, a botanist.

People from all over the world love the Dahlia flowers, which were originally from Mexico. The Dahlia is the country’s national flower. These are extremely beautiful flowers, and you can use them to decorate your garden or home. But keep these flowers in a place that is out of reach of pets and kids. Unlike many other flowers, Dahlias are not used to make medicines as they are poisonous.

Interestingly, the petals of this flower can be of various shapes – short and long. Even the flowers can have different shapes, sizes, and colors. If you want to know more about the dahlia flower meaning, you must know what these flowers symbolize.

What does the Dahlia flower symbolize?

You might think both are quite paradoxical, and you are right. But dahlia represents these two contrasting things. It wants you to enjoy your life by having adventures and also maintain a balance by rejuvenating and relaxing. Your life should have both of these in moderation.

This dahlia flower meaning is that you should be in tune with your feelings and emotions. It is the only way to develop a strong bond with your romantic partner and close friends. Dahlia wants you to be emotionally committed to yourself as a way to keep loved ones close.

Dahlia symbolizes good behavior and impeccable manners. It is a unique and graceful flower. Dahlia’s beauty might remind you of an elegant woman with high morals and ethics. You can easily make a favorable impression on others by being graceful at all times.

You may resort to lying at times because you don’t want to hurt others. Dahlia wants to remind you that it is not the right way to comfort others. It represents being truthful and letting others know about your feelings. If you lie about something, and your loved ones discover your lie later, they are going to be hurt and disappointed. Remain truthful even when it is hard to do so.

Another great dahlia flower meaning is to be resilient and patient. It is also a symbol of perseverance and the ability to remain strong when faced with hardships.

When you show kindness and love to others, they will also be kind and loving to you. Whatever you give to the universe, it is returned to you, maybe in multifold. Whenever you are angry with someone, remind yourself to approach the situation with kindness. The Dahlia represents everlasting kindness.

You can give a bouquet of dahlias to congratulate someone who has made a positive change in their life. For example, it is a good housewarming gift or a congratulatory gift for someone who’s got a promotion. A dahlia also wants you to keep progressing in your life without looking back.

Dahlia has a unique appearance and is a reminder for you to be confident and not be ashamed of your personality. When you are confident, you will grab the attention of others without having to try hard.

What do the various colors of the Dahlia flower mean?

You will be able to find Dahlias in many colors and shades. Every color has some meaning attached to them. Find out what the most commonly found Dahlias mean: 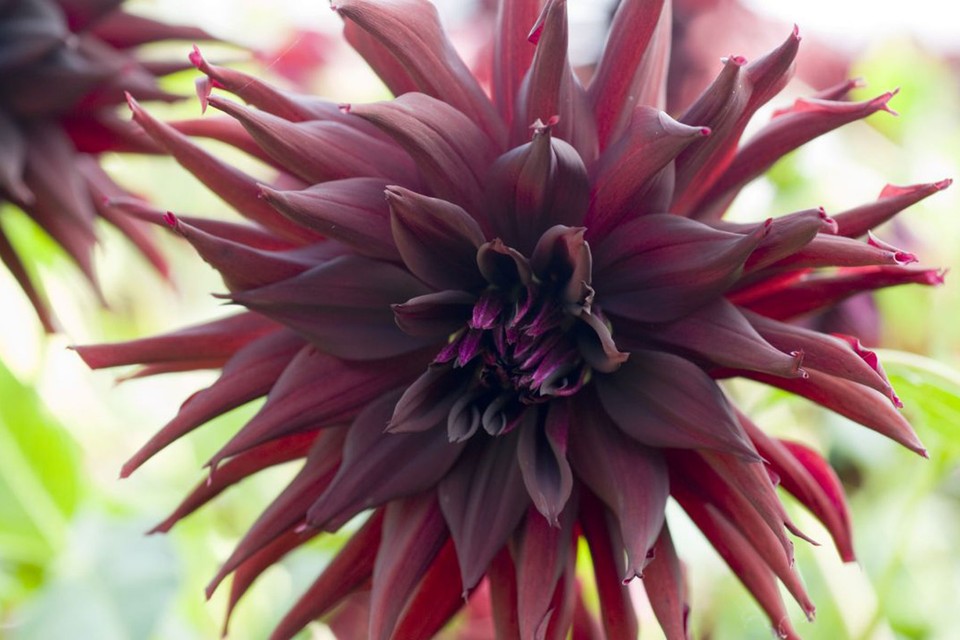 Black dahlias are not pure black, they are more of a deep burgundy color. Dahlias of this color represent negative emotions, like sadness and betrayal. This flower is now associated with violence and murder. Elizabeth Short, who was nicknamed ‘Black Dahlia’ was murdered in 1947 in Los Angeles. Unfortunately, whenever the flower Black Dahlia is mentioned, it reminds people of the Black Dahlia murder case.

Blue dahlias signify new beginnings and positive changes. You can send a bunch of blue dahlias to someone who is having a new development in life. For example, moving into a new city or house, or becoming a parent. Blue dahlias can be congratulatory gifts for friends who are starting a new chapter in their life. You can also buy them for yourself if you are living in a new home.

A green dahlia flower meaning is the same as that of a blue one. Green dahlias stand for fresh beginnings and big achievements. It reminds people of sprouts that grow into trees. Green is a color of development while staying true to yourself.

Pink is a very graceful color, and you can give pink dahlias to your romantic person when celebrating your anniversary. Pink Dahlias mean grace and kindness. They are also symbols of service and feminine beauty. You can give these flowers to your mom on Mother’s Day, and they will also be a great birthday gift for a colleague or friend, friend, or sister on their birthday.

Purple is a respectable and royal color and the purple dahlia flower meaning is royalty. These flowers are a great way to express your admiration and appreciation.

White dahlias are used in celebrations like weddings and baptisms. White is a pure color that stands for innocence and being focused.

Interesting facts and characteristics of the Dahlia flower

You can send a bouquet of dahlias to a couple who is celebrating their wedding anniversary, as dahlias symbolize commitment. It can also be a nice get-well-soon gift for a friend who’s recovering. If you want to encourage someone to stay determined and overlook obstacles, these flowers will remind them to do so.